So I just submitted my finalised build of the game to the Ludum Dare website. It’s probably got more bugs than I can shake a stick at, but I’ve fixed as many as I could find in the last few hours and added as much visual polish as I could. It’s now time to pack for tomorrow’s trip to Wolverhampton for teaching stuff and then put my feet up and have a cup of tea. I am knackered!

I proudly present “THE EVIL REVEAL” a game in which you play an evil CEO who has plans for world domination. You are about to present your evil plans to the company’s board of investors… hoping that they’ll all fall into line and become your evil minions. Unfortunately for you: All of your employees have consciences, and will eventually become scared of your insanely evil ramblings. When they get too scared, they’ll attempt to flee the room and alert the authorities! Luckily, you have an array of dastardly traps set up in order to kill and maim your enemies! 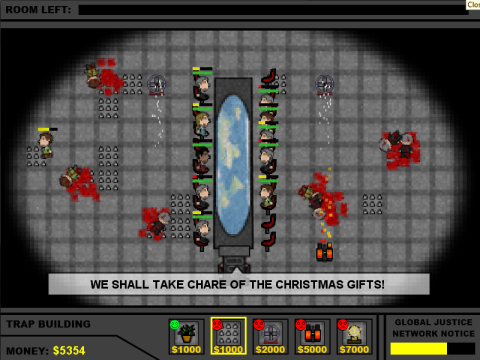 So here’s a little post mortem from my first attempt at a Ludum Dare:

Just to finish things off, here is a trailer for the game that I whipped up in about ten minutes:

I’ve been working on the game most of the day and now have a working basic prototype. I’ve got to work on the art and UI quite a bit before its completed, but things are going quite well! I’ve implemented a group of board members who each have a ‘fear/doubt’ meter, when it gets to zero, they will flee and attempt to alert the authorities to your dastardly deeds. I’ve also put in a basic trapdoor trap… but I’m considering changing it into a spike trap and making things a little bit gorier.

Unfortunately tonight is also the pre-Christmas meet-up and night out with some of my friends who have just arrived home from their respective universities. So I’m going to have to put the programming on a hold for a few hours and go and have a few drinks – I hope some awesome ideas strike whilst I’m out there so I can implement them when I get back.